Just came back to the FT Europe Headquaters after an awesome time at the Nine Knights. The sunset – night – sunrie session on thursday/friday was just crazy but what happened on saturday during the contest was unbelievable. The guys were throwing down every trick you can imagine and Teddy threw a 45 Meter superman front flip over the castle… completely naked. Tobi Reindl said this morning: “Teddy just loves to bring himself in f***ed up situations and then is the only one who would know how to deal with them”

Nico thought about every single detail to make the event as comfortable as possible. Here are the Legs Of Steel boys getting their cab ride to the drop in.

The next picture is probably one of the funniest i´ve ever seen. Austrian Photographer Christoph Schöch took it during the Dodgeball Turnament with a little help of Kevin Catch and Filmer Reini Gruber 🙂 Of course it won the Best Lifestyle category!

Big thanks again to Nico for an awesome time and props for managing everything the way he did! I´m sure everyone would love to come back next year!

Here are the first pics from this years Nine Knights event, a invitational session from German FT Rider Nico Zacek.

yoo..loong time no post! but I have just been shredding, beeing sick and hanging out with girlfriend and friends!!….

Right after Andreas Håtveits “BACKYARD BATTLE” was over..me and aleksander aurdal and ole mustad jumped into the car and drove 7 hours to get to Tandådalen in sweden for the “SECONDHANDS GOLDEN AIR!” and Damn! what a show!
I think it was the number one coolest comp I have ever been to… the show was sick…all the light, music, stokeness etc…

we missed the first training but it didnt bother us to much I think..and after a 40 min long Jam Session 4 people qualified for the superfinals and head-to-head..everyone was throwing down and it was one of the highest level skiing comps I have ever been to!…

Aleksander Aurdal, Ole Mustad, Lasse Nyhaugen and Kim Boberg! hehe what a sucsess!..
I met Aleks in the first head to head and moved to superfinals
against Lasse!! he was killing it so hard and stomped his dub cork 12, I tried to do Bio 10 blunt but landed a bit low and hit both my knees up in my mouth again hehe..but its all good!! lasse killed it and won 30.00 swedish kronor , I got 2nd.. and I got a Backpack! yeah!! haha….check out the video:

SGA 2010 from Secondhands on Vimeo.

After some sick days in sweden I jumped into Anjas car and we drove to her homevillage…for some chill out and then do a big air comp on friday. was so tired and sick….but it was fun..not a super big
jump but its was fun to do some 9s and some sw 10s here and there….Big Ups to Sondre Hermundstad and the crew for fixing the comp!..comp was called (kongen av jotunheimen)
so relaxed and fun..just 1.5 hour sesison on the jump the 4 people moved to superfinals..and Head-to-head….just like in sweden…I guess it was my day…and I won!! wihoo!. and my girl Anja won the girls comp!!

Hope you like it!! Next time i´ll come up with some new shred n breakfast stuff 😉
bless /kimboo
This article is originally found on ESPN.com/Freeskiing 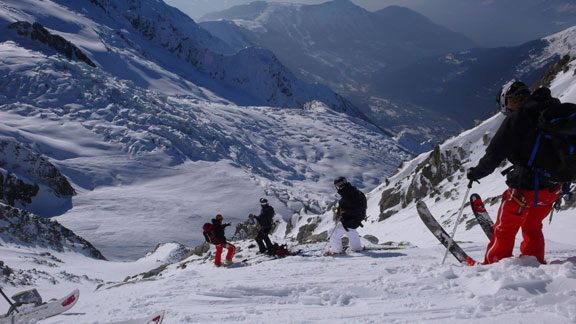 Seth Morrison Photo Getting ready for another big line in Chamonix.

Chamonix was a place I had never been in all my years as a skier, so this trip was a real treat. Kye Petersen and I were here with an Oakley film crew to document our steps as we scouted lines for an upcoming late-spring trip. Chamonix is not a place to be taken lightly — danger lurks around every corner, and you’re never actually safe until you are at the valley floor drinking a beer with your bros, reflecting on the day’s adventure. It was unlike anything I have ever done. One day at a time and working our way into it was the routine. 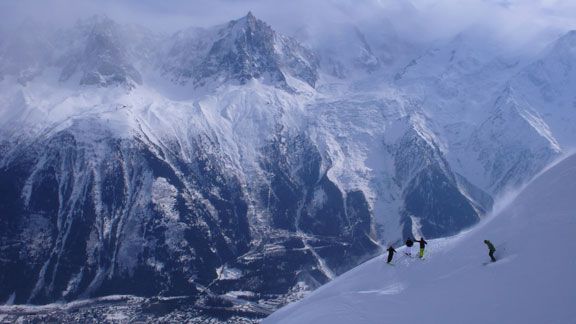 For the most part, the snow was hardpack. This made the steeps even steeper, and the degrees of the runs here are the real deal (most of these areas have been climbed and that’s where the steepness ratings come from). In addition, I was skiing on powder skis the entire time, so it was an added challenge to stay focused on the hardpack conditions. No-fall skiing was the name of the game, and focus was the main concern as we practiced ice climbing, familiarizing ourselves with crampons, ice tools, rappelling and other needed bits of exposure to the world of Chamonix. Skiing with a much heavier pack than usual filled with gear you normally wouldn’t carry at your local ski area is something that definitely keeps you mindful of each turn. 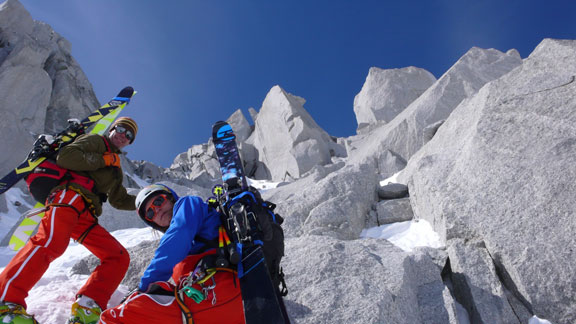 Seth Morrison Photo Watch out for the rocks.

We did a lot of skiing on and around glaciers. Each day was filled with some sort of hike/skin or rappel to get to a line. 9000 vert runs loom off the Aiguille Du Midi and even 11,000 vert off the Mont Blanc. This place is big and real. Fear of rock fall, falling into a crevice, avalanche, serac fall, or a small mistake (like a crash) are in the back of your mind during every run. 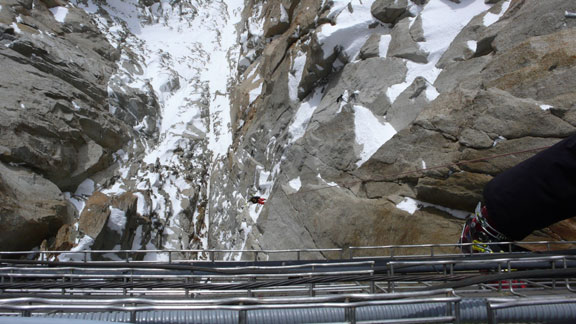 Seth Morrison Repeling down to another hairy line.

The bottom line? The lifts take you to places that — in other parts of the world — would take many hours to climb to from the bottom. There are regular ski runs in the valley, but that wasn’t our program. We went for the mind-altering experience of being in these mountains, and skiing around with some seasoned American Mountain Freaks gave us a look into what Chamonix is truly all about. It’s clear why people come here year after year: In this place, it doesn’t matter how good you are or how rad you think you are. Looking around you see people doing things much crazier than you and what you’re doing doesn’t really matter other than getting down in one piece.

… Which, of course, is another reason why a few celebratory beers are in order at the end of every day on the valley floor. You made it out alive, and that’s a big enough feat in itself.

check out 14 year old Lucas Mangold going pro in skiing and editing.
Seems like Lucas is a fan of the colour green 🙂